right now I'm writing a very brief, nasty story, and waiting for the turn to occur. While I'm waiting I'll take a sec to explain myself--I'm talking about writing and writing, thinking I know what the story is about, and then I get to where the end is supposed to be only to find a dark cliff. The turn then, is the moment when the story's core reveals itself as something I hadn't anticipated.

The draft title is "Exoskeletal," and I think it's a horror story, but I'm not sure. It hasn't announced itself yet.
Posted by Laura Ellen Scott at 8:14 PM 3 comments:

all fiction is fantasy, part 1

Posted by Laura Ellen Scott at 3:13 PM No comments:

and because I can’t leave it 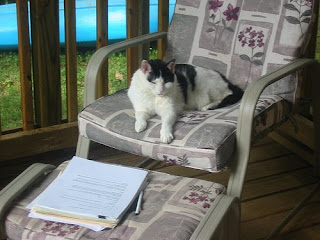 AWP’s distillation of the NEA report decries the decentralization of reading’s importance in culture and declining basic literacy in the same breath, as if they are the same problem, which is a bit like saying a starving child and a man who only eats brie are equally malnourished, and can therefore be served by the same nagging science. They aren’t and they can’t. The child needs the state. The man needs friends.

To the NEA’s credit, they pay attention to 9 year olds, and “Reading for fun” is one of the important measures in their report. Huh. I rather doubt that AWP supports fun, so that must be a sticky point for them. Well I know it’s cheap laughs to pick on AWP’s review of the report rather than complain about the study itself, (I can't pick on the study--it's all full of numbers and stuff) but I feel AWP speaks more directly to writers and writing teachers than the NEA. I won’t go so far as to claim they set the tone, but they certainly echo it.

AWP could set the tone though, if they were more stimulated than depressed by the new. Seems like it’s their job to be stimulated and stimulating. Certainly the writers they feature recognize that the act of moaning is a symptom of sentimentalism.

Posted by Laura Ellen Scott at 8:34 AM No comments:

get out of the way

As I teach new writers I continue to struggle with the culture and expectations of the institution contrasted against the energies and interests of my students. And it doesn’t help that the editorial board of AWP Chronicle keeps booking passage on the literacy-Titanic. Setting aside the science of the NEA report sophomorically entitled “To Read or Not to Read,”—I’m serious, that’s the title—this conclusion, by AWP Chronicle writer Matt Burriesci, is what’s really telling: “[T]he report strongly suggests that new media are displacing the intellectual engagement of reading with mere entertainment.”

That’s right, he called us trifling.

Luckily, this youth hating discourse occurs in places where it will never matter. But still it hurts, because in the so called culture wars I like to think of myself as a boots-on-the-ground gal, helping new writers test themselves. The tacky residue of fetishizing print media—and don’t let anyone tell you this isn’t about a diseased ink and paper industry—is confusing to new writers, even discouraging. Their sense of story is very much inspired by input from every possible narrative stimulation, as it should be. The NEA does a disservice to curious minds by defining “reading” so narrowly.