Why I Miss My Beagle 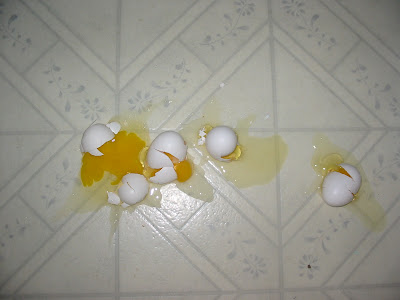 I'm not a portents and omens gal, but this is not a good start to the morning. And if chihuahuas were proper dogs,
I wouldn't have had time to take a picture of my nitwittedness. Just heard that my story will appear in the Nov 15 issue of Storyglossia, which was what I was thinking about when I held the egg carton by the lid, extracted one egg, and dumped the remaining four to the floor. It's as if I had never encountered an egg carton before, and I was unprepared for its physics.

But enough of this grieving over lost breakfast and competence. Go read Paula Bomer's brilliant story, "Reading to the Blind Girl." That'll fix everything.
Posted by Laura Ellen Scott at 8:48 AM No comments:

Why I Dislike Time Travel 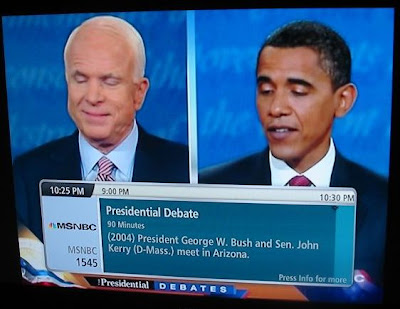 Posted by Laura Ellen Scott at 7:34 AM No comments:

It's the foot rub, stupid

I've had a great writing weekend despite heightened workplace stress and the collapsing economy. Last night was me at the cabin, sipping wine, listening to jazz on the XM, and sailing past page 200 in my novel draft(the Louisiana book). The end of the book revealed itself to me, and I'm both frightened and thrilled by its complexity. Hope i can live up to it. I also wrote a seduction scene that culminates in a post-coital foot rub, included as evidence of my main character's genius with women, an instinct that has been dormant all his life because he's humiliated by his weight. I think the foot rub has been sadly underutilized in mainstream erotic writing.

There's really no sex in my other novel (the West Virginia book), which is complete but without representation. Probably not smart of me but I wanted to avoid rom com cliches, and write about a mature woman who could have adventures without leaning on a romantic partner. Instead of lovers she has friends who find her independence frustrating, and of course they are always trying to get in her shit.
Posted by Laura Ellen Scott at 2:34 PM 3 comments:

Austin! You're a Reader!

--was that from a hooked on phonics commercial? Back in the 4th grade the cutting edge technology was this gizmo motorized clamp that let you see only a few lines on the page of a book and slid down, forcing you to READ FAST. Because everyone knew that READING FAST was crucial.

I also recommend Erik Secker's "The Red Door," a super neato short story in Farrago's Wainscot. All you need to know is that it features a brain dressed up as a meatloaf. Reminds me of the video for Gnarls Barkley's "Who's Gonna Save My Soul?"
bio note claims this is Secker's first fiction publication--that's great.
Posted by Laura Ellen Scott at 7:37 AM No comments:

a pivotal moment in my education 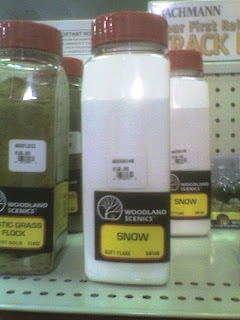