back to the potboiler?

so that's two agents who have read the entirety of my WV novel. Both said the same things--love the writing and the characters, but there isn't enough conventional tension. I am convinced by the professional consensus, and I already have a detailed plan. I'd be more bummed if the WV novel was the only thing I had going. But the New Orleans novel is revised and ready (I think!), and I'll start the query process asap.

Despite the fact that I couldn't win these agents over, I'm pleased by the honesty and advice they've offered. And both left the door open for me to send again. This summer I've learned a lot about writing.
Posted by Laura Ellen Scott at 5:22 PM 1 comment:

Dean just finished reading the whole draft of Social Aid & Pleasure, my New Orleans sort-of-fantasy novel, and he's given me brilliant suggestions. He's a poet and he hates novels, but he's always right about my work. Erin Fitzgerald (I love name dropping) read the first four chapters and gave me great notes. I think that I can make the fixes in short time (by early august?), after which I'll start the query process. Query One being, What kinda book is this? Sections of it have already appeared as short stories in Juked, Barrelhouse, Pank, and a forthcoming Killauthor.

Writing the synopsis for this project has been easy and straightforward. I think that's a good sign.

I just got done reading a damp gothic about conjoined twins. I don't want to talk about it. Am now reading Eggars' Zeitoun, which is riveting. I'm only 50 pages in, but the idea of a professional and responsive contractor is deeply romantic.
Posted by Laura Ellen Scott at 1:51 PM No comments:

Games to play in the car

1) "Imaginary (probably abysmal)Literary Collections from the Tenured" --must take one of these two forms: a) A something of somethings, or b)Something-ing the something
2) "That'd be a great name for a Blog" (formerly band/album)
3) "Dumbest Who lyric"
Posted by Laura Ellen Scott at 4:30 PM No comments:

Street adderesses I know by heart, except my own

I think that's it.
Posted by Laura Ellen Scott at 4:27 PM No comments:

Labels: afraid to check my email 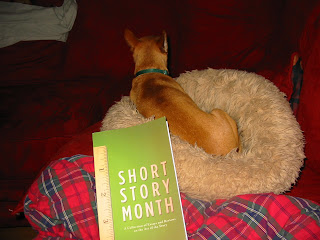 As you can see Newton gives not one damn about my dizzying fame. Just got this in the mail today and it's way cool, featuring blogged reviews/considerations of short stories posted throughout May 2009 by Aaron Burch, Sean Carman, Matt bell, Steven McDermott, Dan Wicket and the "guests" of the Emerging Writers Network.

It has, um, pages. Let me explain. 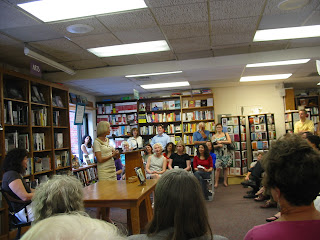 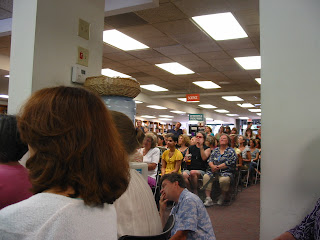 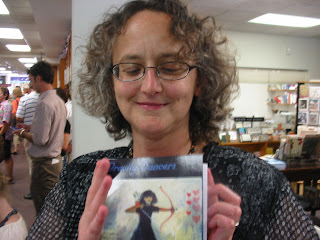 The launch event was PACKED. Enthusiastically emceed by Michelle Brafman, who wrangled eight contributors who read brief excerpts from their work and answered questions from the crowd. Dean said it was fun, but if it were 8 men, we’d still be there.
The readers included

But my favorite thing was meeting up with a former student, Eugenia Tsutsumi. She took an undergrad workshop with me years ago, then went on to complete our MFA program at Mason. She told me that I showed the class how to write short-shorts (not likely. Best I can do is show someone that they exist), and she claims that experience has led to her getting a story accepted by Caketrain. I am hugely excited by this. Another former student, Sam X. Brase, just placed a piece in The Foundling Review. I’m unjustly proud of his accomplishment, especially since he credits Handsome! Dave! Erlewine! ™ with editing help on that story.
Posted by Laura Ellen Scott at 8:17 PM 4 comments:

Politics & Prose will host a launch for Gravity Dancers, the 4th volume of fiction by DC area women writers, on Sunday, July 19, 5pm.

I'll be there to get my contributor's copy and one for mom I guess. My story in the anthology is "Moon Walk." It's a ghost story set in West Virginia.
Posted by Laura Ellen Scott at 10:15 AM 2 comments:

Just got back for a hedonistic weekend in New Orleans, which makes the publication of two new stories in Pank even sweeter. Ethel Rohan has a great one in the same issue as well.
Posted by Laura Ellen Scott at 1:54 PM 3 comments:

someone just poked my west virginia novel with a stick. good timing, too, because next weekend is the launch party for Gravity Dancers, at Politics & Prose. My story in that collection is called "Moon Walk," and it has zero Micheal Jackson content, but it is derived from the novel.

Going to a different Moon Walk this weekend though. We're headed to the French Quarter where the river walk is named after Moon Landrieu, a politician and businessman credited with revitalizing New Orleans in the 60s-70s.

Then I need to spruce up my synopsis.
Posted by Laura Ellen Scott at 7:57 AM 1 comment:

A Reliable Wife, some thoughts

Just finished reading Goolrick’s A Reliable Wife. I liked the darn thing, but I'm not sure why anyone is taking it seriously. Maybe they aren't. It is in no way “complex,” as the cover blurb suggests, or “darkly nuanced,” as cited in the Washington Post review. In fact it is a predictable and simple book about three existential characters who derive transcendence through lust to escape the miseries of the past and present. There’s Truitt, the rich, haunted widower. Caroline, the scheming party girl who will never go hungry again. And Antonio, the dissipated prodigal who lives on oysters and champagne. You do the math.

In between scenes of damp consuming passion, we learn where the characters came form and how they got to where they are, locally and psychically, but the particulars don’t really add up to anything that matters. For example, early on Caroline sews jewels into her hem only to lose them in the snow after an accident. She spends her free time looking for the jewels. Eventually, the caretaker finds them, but by that time she no longer cares about the jewels. This works as a symbol of her willingness to give over her autonomy, but the literal loss of the jewels has no bearing on the events of the book. I think that’s a problem. Like Alton Brown, I don’t like single use tools.

That said, I recommend it, especially as a super fun companion to the Lesy work.

***reading this post 2 hours later, man it's nasty. But I really enjoyed the book. I guess that, as I work on my own novel and worry about its future, I really grind on what disappoints me in published, well sold books.
Posted by Laura Ellen Scott at 6:59 PM 2 comments:

well alrightey, I'm "through" revision 1 in that I've gone through the draft and managed to whittle it down to 330 better pages. I got some great advice about the first 40, which I'm still applying, and now I think I may be at the stage of re-writing the chapter by chapter summary to see what this tighter version looks like, bird's eye view.

one of my worries is that I never really answer the questions of the supernatural phenomenon that drives the plot. all I do is write about the affect on my main character. hope I can get away with that.

next weekend we go to new orleans. whee! research! gonna eat and drink myself stoopid.
Posted by Laura Ellen Scott at 10:48 AM 4 comments: