Dead Mouse Mysteries Presents: Why I was allowed to sleep in this morning

For most of the summer my animals, two cats and two dogs, have not allowed me to sleep past 7 am, so why was I able to snooze until 9 this morning--trash pick up morning, of all days? I am quite a light sleeper under normal circumstances, but Dean is away and my thoughts are naturally full of serial killers--I should have been up at the crack of dawn. And why was I humming "She's Leaving Home" immediately upon waking? I hate that song.

At first I didn't notice too much that was unusual: a bit of cat puke, the bottom shelf of the book case cleared out and scattered. Newton, my elderly chihuahua was looking paranoid. I assumed he pooped in my office again, to mourn Dean's absence.

And then I found him. Mr. Mousie. Actually, I kinda stepped on him, but he was already dead. 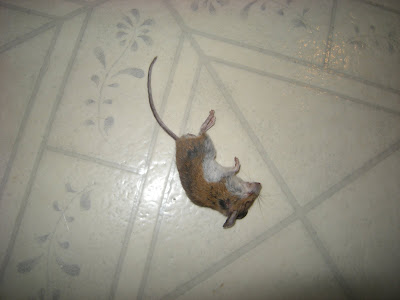 Poor Fella. But Who Dunnit?

The only documented killer in our house is Einstein. She offed two baby bunnies in the first summer we had her. But her alibi was solid; she was with me all night. 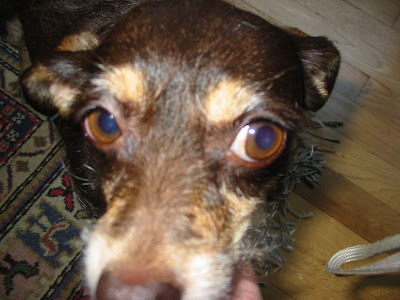 So, was it Newton? Not likely, he's got weak legs and cloudy eyes, but he sure looked shifty. And after two weeks of "I can't get down from the bed without help," suddenly he's able to sneak out to the couch on his own? He knows something. 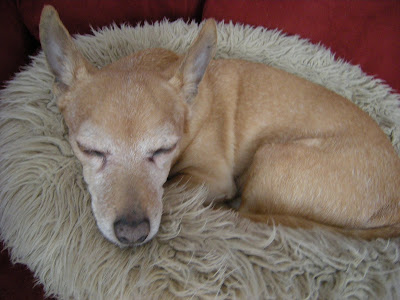 Perhaps it was the alluring and aloof Harriet? She seemed uninterested in breakfast. And she's been doing a lot of internet research lately . . . WAS IT THE CAT ROLLING AROUND ON TOP OF MR. MOUSIE'S CORPSE AND FORCING HIM TO BREAKDANCE? 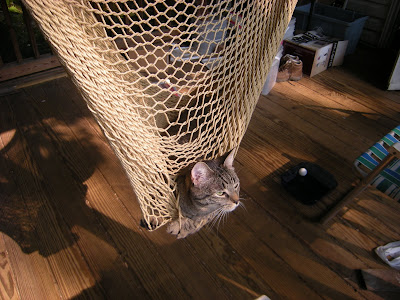 Oh Charli, I guess you're not a kitten anymore.
Posted by Laura Ellen Scott at 11:26 AM 4 comments:

Labels: cats, dogs, mousies is what I eat 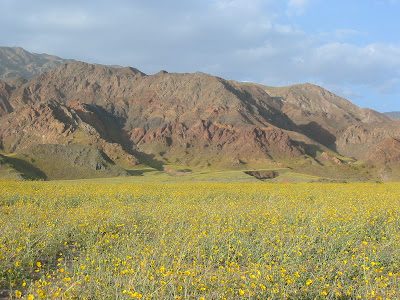 Starting work on the new novel, and already I realize I don't know enough about the following:

In other news, yesterday I was offered the chance to do a reading with Steve Almond in DC, but it turns out I'm going to be in New Orleans when Almond is coming into town. It's probably for the best, seeing as he'd blow me off the stage. He's really amazing, and it's fun to watch an audience full of ladies-of-a-certain-age (my age) fall all over themselves for a chance to chat with him. He's big with the HRT demographic.
Posted by Laura Ellen Scott at 9:26 AM 3 comments:

We have a Borders store just a couple of blocks from our home, but we stopped shopping there a long time ago when the place was overrun with vampire books and Glenn Beck memoirs. I feel very badly for the folks losing their jobs, though; they work hard. We stopped into the store yesterday, and it was a madhouse of activity, mainly kids running wild. But the discounts weren't worth the trouble--only 10% for the stuff I like. 40% off magazines, though, so we bought Oxford American, Twisted South, Q, Carving, and Lost Treasure. The last two are probably not familiar to you, but they are what they seem: a wood working magazine and a treasure hunting magazine. Whole pile for $20.

My advice, if you are doing any book or other shopping this week, is to do it online. The folks at the Scranton based Pages & Places book festival are running a fundraiser for Equality PA, an organization that supports LGBT causes in Pennsylvania, and this is the final week. If you shop amazon through this portal, a portion of the proceeds goes to Equality PA.
Posted by Laura Ellen Scott at 11:48 AM 1 comment:

Last weekend I attended the inaugural Indie Lit Summit in DC, sponsored by the moguls and mavens of Barrelhouse and The Lit Pub, and facilitated—with charm and efficiency—by B’s poetry editor Dan Brady. The summit is a regional thing where literary editors and publishers convene to discuss the problems and opportunities of the day; in our case, the breakout sessions we decided on were marketing, readings venues, and community building. I should stop writing “we,” though. I’m pretty sure I was the only non-publisher/editor in the room, and I tried very hard not to wade into discussions with ideas like, “Let’s all buy a beach house together and smoke opium and have barbecue party-readings!”

It was an eye-opening, full day of discussions, kicked off with a keynote from Andy Hunter of Electric Literature—and here I should confess that I have ignored EL ever since I first heard about them and that they paid writers $1000 per short story. I’m either a bolshie asshole or I think boutique short fiction is a whitefolks concern (those positions might be the same), but Hunter was pretty convincing about the commercial possibilities of new fiction + innovation. I should also remind you that I believe everything that anyone tells me at the time they are telling me it. One of the points he made was that Rick Moody’s twitter based story for Electric Literature in 2009 was a huge success, despite the immediate backlash from mainstream concerns. You can read the argument here, but the upshot was 1) the story was good, and 2) the delivery resulted in a dramatic (like 10X) increase in followers and subscriptions for EL.

By the end of the day the Indie Lit Summit came up with some very exciting ideas that I probably shouldn’t go into right now, but in general it felt like the smartest-guy-in-the-room from several rooms all ended up in the same one at once: 826DC, appropriately enough.

Several things became really clear as we attempted to build a list of reading spaces that already exist in the DC/Baltimore area:

1) There are lots of places to read. Yay!
2) If you write poetry and nonfiction. Oh.
3) Not many are bookstores. Dang.

So let’s say your debut novel is coming out in October, and your publisher is counting on your hometown events to be big draws. You may be screwed, lady.

Learning highlight: If you skip out on the last minutes of the Marketing & Publicity session to have frozen yogurt with gummi bear mix-ins with your fairy-princess costumed gosh-daughter you’ll miss out on something important about Smashwords.
Posted by Laura Ellen Scott at 9:43 AM 1 comment:

Right now my new computer is being shipped from Shanghai, which means that by July 21 or thereabouts I will begin writing my next novel. It's all rolling around in my head--set in Death Valley 2005 during the big bloom and there was enough water in Lake Manley to float a kayak. It's going to be a treasure hunt story with a quirky heroine who inherits a mystery house from a cowboy actor.I can't wait to get started.

I don't do MFA bashing; I have one myself, and I'm a firm believer in the fact that you need to work hard and develop to make those 2-3 years mean something. There are too many folks going into programs expecting to have The Big Secret revealed to them at last, and they slip into a passive mode, almost a regression. Well here it is, this is what nobody is willing to tell you but me: writing novels is a blast. writing short stories is kind of a pain. In MFA programs you'll be writing lots of short stories, and it's gonna hurt.

I found out from my publisher that he was nervous about asking me to do so many significant revisions to Death Wishing because he was sure I couldn't do them. Every other time they'd asked a writer to re-write significantly, it had ended in failure. In fact, it's Ig's unofficial policy to reject any book that needs revisions. But they really wanted this book to be what it is now. End of inspirational story

But here's the pervy part. When they said "change all this, but we might not like how you do it anyway" I was delighted. I got to write the book again.

Writing books is fun. I've known that since I was a kiddo.

Not sure what I'm getting at here. I wish my computer would hurry itself up and get here.
Posted by Laura Ellen Scott at 4:12 PM No comments:

Let's seeeeee. Just sent back galley corrections to the publisher. Working on website. Got my picture taken. All these have bw versions as well, but so far my 3 yr old publicity manager says, "I like the pink one!" The pics with the meerkats statuette are in my office (hence the FROM HELL graphic novel in the back). The Dylan/bird/shadowbox pics were taken in poets Eric Pankey's/Jennifer Atkinson's office. I'm pretty sure the shadowbox was made by my dear friend Tara, the inspiration behind this very short story. My beautiful mother made the necklaces. The photos were taken by artist Jennifer Stone, who remains the only person able to take a non-freakish looking picture of me. 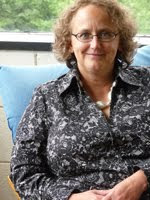 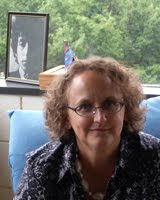 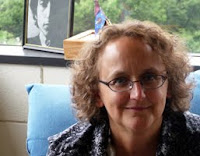 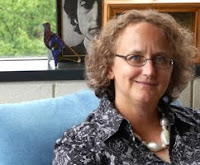 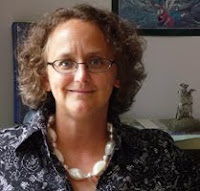 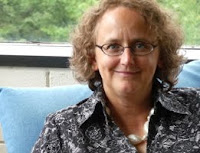 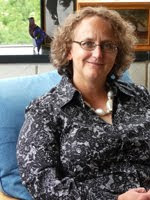 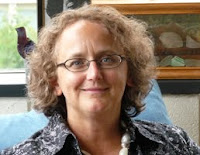