I shouldn't say anything yet, but I'm too excited not to. And yet, I don't have anything to say--except that the kind folks behing not-even-fledgeling-yet Uncanny Valley dig Curio, the ghost/goth story collection that I've been pushing since March. Details are still floating about (I only found out yesterday [best thanksgiving ever, or at least better than last year's ulcer party]), but I can confirm that we are not talking conventional chapbook.

so excited.
too excited. too too.
stoopid happy. got up at 4 this morning for no good reason, that kinda thing.
Posted by Laura Ellen Scott at 8:05 AM 7 comments:

I'm passive/aggressively pretending Blip doesn't exist until they get the Mississippi Review online archive posted. For me, getting published in MR was really important to my progress. Here's a Thanksgiving story that appeared in a politics themed issue from 2004, edited by Gary Percesepe. Al Gore was in that issue, too.

"The Cool Aunt" is about a middle class teenager from PA who decides to wear a burqa to a family gthering. It's a conventional, domestic kinda story, one of the last I ever wrote of that type. The Thanksgiving story I'm working on now is a series of flash sections with crows, ministers, and a dead kid in the attic. And yes, Donna, there is a pie.
Posted by Laura Ellen Scott at 10:14 AM No comments:

idea for a national park 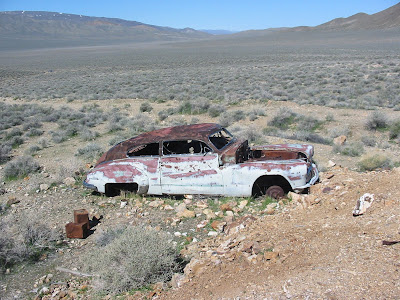 My husband has an Ipad, so one of his jobs is to tell me what's really happening in the world while CNN's John Roberts struggles to curb his impulse to say "you go girlfriend" every 15 minutes during the morning news. But there is coffee involved, and Dean sometimes flits through several stories, so I usually go out into the world armed with a jumbled sense of current events.

For a few minutes yesterday I was seized by the incorrect notion that coyotes were roaming the streets of Detroit, apparently with the blessing of that city's wildlife management agency. But that was wrong--the city in question is actually Chicago.

And I was disappointed. I've been to Detroit exactly one time, under stressful conditions, and I recall that there was an eerie yellow fog hovering over a cracked highway leading into a gray city that was quiet and edgy. In the years since (about 20 now), the Detroit of my imagination is post-apocalyptic. I apologize to the real Detroit, but the Detroit in my mind is a perfect place to encounter a coyote loping down the middle of an abandoned city street.

Not that it's possible, but if we did put aside some stretch of a failed, post-industrial city watched over by the NPS, I'd go.
Posted by Laura Ellen Scott at 9:47 AM No comments:

Time is hard to predict

This two day work week will be jam packed with things that need to get done, food that must be eaten, and stress that WILL float to the top. I'm going to walk as much as I can so that I can argue with my imaginary friends--

I just noticed we haven't changed the calendar page from October.

The collaborative project seems to have stalled, except that I just blooped out a new, horrible story last night.

I am expecting news, which means I'm as emotionally stable as a 14 year old.
Posted by Laura Ellen Scott at 9:06 AM 1 comment: 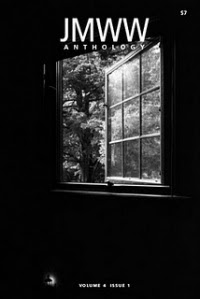 I'm listed as a contributor to the JMWW V Anthology, which, if it is like their previous anthologies, is a best-of collection from their 2010 issues. There is a horrible possibility that my name appears on this list in error, but if that is the case I'll just be pitiful and entitled until Jen gives in.

The all star line up--

Even though I am way too busy, I just set a bunch of projects in motion, several related to my duties at Prick of the Spindle, a job that gets more interesting with each issue.

But it's also my favorite part of the semester--we're lurching into round 3 submissions for my advanced workshop. I LOVE round 3 because that's when everyone panics, having run out of polished work. Give me something sloppy, inspired, and volatile, kids.
Posted by Laura Ellen Scott at 8:45 AM 4 comments:

They got me again. We're coordinating NaNoWriMo events at Mason again, but this time with a BUDGET. No more passing out leftover Halloween candy at write-ins.

Come here to watch us suffer.

BTW nano-haters, I care not one crap about your cynicism. Hope it keeps you warm at night. Oh, and shut up anyway.
Posted by Laura Ellen Scott at 2:04 PM No comments: