Does Travel Writing not mean what I think it means? 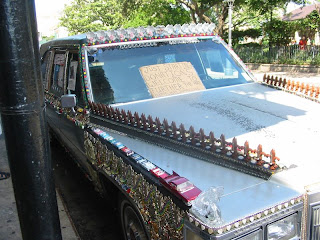 J. W. Wang sent me the link to "10 Online Literary Magazines that Publish Great Travel Writing" in Matador magazine. Juked is number 10, and my story "Do you know what it means to miss" is excerpted as a sample.

I'm not sure how Juked or my story--in which the mayor shoots down orange clouds in New Orleans, crushing Victor the fat corset maker to death--contributes to travel writing, but Matador likes indie lit scene writers, that's for sure. Check out "Brandon Scott Gorrell Goes to Oakland."
Posted by Laura Ellen Scott at 12:13 PM 2 comments:

Sean Lovelace has the very best imagination, ever, so I'm thrilled that he posted a nacho-trippy-inspired reading of my story from elimae, "Render, or to transmit to another," which was selected for the Wigleaf Top 50. He nails it of course. I write from the 19th century.
Posted by Laura Ellen Scott at 12:51 PM 2 comments:

this is SO GOOD

"Unbecoming a Librarian (In Nine Steps)" by Michelle Reale. It's dedicated to me, you know. Heeee!

Michelle owns the season, I tell you.

I've submitted to eyeshot twice. the rejections notes said "strike one," and "strike two" respectively. never worked up the nerve to strike out.
Posted by Laura Ellen Scott at 8:05 PM 1 comment:

The time I was entombed

I made a comment elsewhere that makes it sound as if I don’t appreciate my publication in the venerable Ploughshares several years ago, and I think I should walk that back, because the experience was invaluable even if the story itself was/is pretty meaningless.

I had rough times in my MFA program, mainly because I prioritized smug lyricism over story, and early on Richard Bausch called me out on that, sort of memorably. So when Al Young conducted a visiting writer’s workshop, beginning with a grave speech about how essential it is for the main character to change by the end of the story, I was nervous. See, he had my manuscript in hand, a story in which a guy sits at a bar in front of a big painting of Dolly Parton, thinks about his life, leaves the bar. That’s freaking it. 20+ pages.

And then he said my character never changed. I braced for another MFA beat down. But no, he said it was a good story any way. I think he used the word ‘ineluctable.’

Several months later, Young called the dept asking for that “woman with the brown curly hair” who had written a story he liked. He wanted me to make the revisions and send it to him for an issue of Ploughshares he was editing with the theme of “Believers.”

So that happened. A pub in Ploughshares, graduation and immediate employment, and I didn’t write for years. When I did write, I played with novel projects and had no interest in literary short stories—too much cancer and divorce amongst the middle class—and journals made me sad because I was convinced that the only reason someone would crack Ploughshares to read my story was to see if they could do better than me.

Then years later, Ploughshares offered authors the opportunity to join their digital archive. I opted in, and the rush I felt from seeing my work online was powerful, which in turn sent me into the world of online lit where what I read was so exciting that my love of short story was re-ignited.

I don’t have an ending for this. Oh, almost forgot. When Young called the dept, the receptionist got over excited for me and kept saying it was Andrew Young who needed to speak with me asap. That was confusing.
Posted by Laura Ellen Scott at 9:10 PM 11 comments: 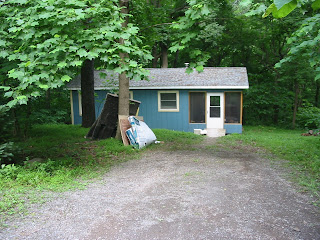 I'm revising my draft, Social Aid & Pleasure, and that's coming along, but my goal was to shed 70-80 pages of the 386 I ended up with. I'm at about 140 pages now, and I've only managed to dump 20 pages so far. Maybe I'll run into some digressive chapters about knot tying soon, but I don't remember writing any of those.

The main job in the first 40 pages was to make them more active and focused, less expository and discursive. This required me to wrestle with my narrator, who is a naturally loquacious, sometimes affected, dude. Dean read the pages, liked them, but he knows the concept too well to determine whether I'm delivering enough information at a decent pace, so I have two readers on the job (thanks E & D).

I also put a section of dialogue up on fictionaut, sans context, and the folks there are treating me very well indeed. I'm feeling pretty good about how this is going, with the only barrier being the fact that people keep expecting me to work for a living.

The pic is my WV cabin undergoing renovation. If you click on it, you'll see the toilet is outside in the yard, next to the entrance. This is not our preference.
Posted by Laura Ellen Scott at 6:43 PM 1 comment:

Go back to J-school

John Roberts (mtv correspondent turned CNN morning anchor) made me mad today, and it was just a little thing, but cripes. After an otherwise sane exchange between Kiran Chetry and a senior editor from WIRED, JR gets all harumphy before he chimes in with something along the lines of, 'I don't get why some bloggers won't blog under their real names.'

Unrelated, but still pseudo journo bashy: when I started college I was a journalism major. When I switched to English, I thought my mom would be mad, seeing as there weren't clear professional options with a BA. But she surprised me. Said, "Oh thank God. I thought we were paying for you to learn how to become a pickpocket."
Posted by Laura Ellen Scott at 9:09 AM 2 comments:

New story up at Northville Review

"This American Death" is up today at the always fun Northville Review. It has zombies and public radio in it, and it was written specifically for NR, which is just about my favorite of the newer venues. It's a journal where you can really see the eccentricity of the editor shining through. Plus, Erin Fitzgerald is a great American.
Posted by Laura Ellen Scott at 4:59 PM No comments:

The Possibilities are Endless 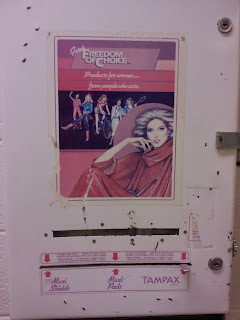 This is a feminine products vending machine, located in the restroom outside my office. Check out the options for the gal on the go who won't be held down by a bit of monthly bother:

The woman in the foreground is not wearing a snuggie. That's a cowl neck dress, kids, accessorized with a lion 'do and a thoughtful expression. I have never felt the way that woman seems to feel. I think I'm glad of that.

At the bottom three possibilities promised, but each selection dispenses the same generic pad.
Posted by Laura Ellen Scott at 2:30 PM No comments:

Not since Free Pancake Day

. . . have so many writers gotten soooo excited. And for good reason. Matt Bell has just announced his new venture, a new online journal called The Collagist, set to debut in August. It's sponsored by Dzanc Books, so it's already awesome.

Once it comes out, readers will be just as excited, but at the moment I'm thinking Matt's inbox looks pretty scary.
Posted by Laura Ellen Scott at 5:27 PM No comments:

I want to have a michelle reale weekend

I'm doing this because it doesn't look like she has a stinkin' blog. These were her pubs last weekend. Guess she took Saturday off.

enjoy.
Posted by Laura Ellen Scott at 4:04 PM No comments:

Paul Toth's deliriously satisfying Hit and Run has suspended publication due to "lack of readership," which seems insane--who did not check this site daily?

I'd join the crowd of folks clamoring for its return, but H&R must have been difficult to sustain, given the concept. It was/is an idea that is almost too good. Perhaps someone will take it over, but I'm okay thinking of it as a gallery that has filled to capacity.

Wow, my little 750 word story got a real work out in May. A fragment of it in this this gorgeous collage thingy (press both buttons for an interesting mix) from the mysterious and riveting bedepressed blog. Looks like it's on a hiatus. Hope it comes back. Got a couple Nancy Drew types working on this.
Posted by Laura Ellen Scott at 10:43 AM No comments: